Kwaïdan weaves encounters between the real and the unreal, between the butoh dance and the ghost music. Here, love becomes the door separating these two worlds, playing fusion and confusion.

A creation inspired by Kwaïdan, a novel by Patrick Lafcadio Hearn. An Irish journalist, he chose to live in Japan at the beginning of the twentieth century; He traveled the country to the most remote places; He collects twenty stories of phantoms, in which women attach themselves to their past life and their love, weave invisible bonds between the world of dreams, that after death and real life. These women let us float between the two universes.

The ghost opens the frontiers of the gaze to strange worlds.

Kwaïdan extends a performance of butoh dance and double bass initially prepared to be ephemeral. From the creative intensity of the two artists, from the warm reception of the public, there was born the desire to perpetuate this encounter between the worlds - real ~ unreal, cultures - Orient ~ Occident, languages - buto dance ~ prepared bass, - woman ~ man, from individuals - Sayoko Onishi ~ Robert Toussaint

Visit here the french version of Kwaidan on Man'ok website. 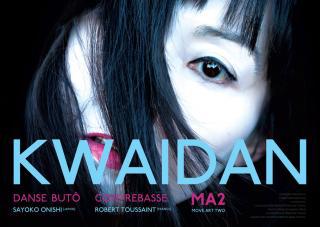